Cleavage of early animal embryos produces the populations of cells that form body tissues.  In Drosophila, cleavage is expedited by coupling nuclear divisions with incomplete divisions of the half millimetre long fertilized egg (a large single cell).  Hundreds of evenly spaced nuclei divide synchronously at the periphery of this cell.  As a nucleus initiates division, it induces a transient, local, cup-shaped compartment from the initially flat surface of the cell.  These compartments provide attachment sites for the nuclear division apparatus, and prevent collisions between neighbouring nuclei.  This system is an important model for understanding molecular mechanisms that shape the cortex of a cell.

The system is ideal for studying two cytoskeletal networks that function across animals to control the division, migration and interactions of cells: (i) branched actin polymer networks produced by Arp2/3 complexes, and (ii) parallel actin polymer networks produced by formins.  Formin-based networks also engage non-muscle myosin II (myosin hereafter) for contraction.  After decades of research from numerous groups, a long-standing question has remained: how do these active materials transform the flat embryo surface into a honeycomb-like compartmental array for nuclear division?

In a 2018 research article in Developmental Cell, we reported a mechanism for nuclear compartment formation of the early Drosophila embryo 3.  By dual live imaging, we found that a growing cap circularizes and bends inward upon meeting its actomyosin border, a border which then lines the basal rim of the cup-shaped compartment.  Through genetic perturbations and imaging, the caps were found to physically displace their borders, and, reciprocally, the borders were found to resist and circularize their caps.  These interactions create an actomyosin cortex arrayed with circular caps.  As each actin cap grows against its border, it appears to buckle for compartment formation.  Additionally, through laser cutting and microscopy we discovered that an embryo-wide actomyosin contraction produces outwardly directed counterforces that swell the caps.  Thus, actin caps form clearances of the actomyosin cortex for buckling and swelling of these clearances to form a compartmental array.

Our studies have advanced fundamental understanding of how cortical cytoskeletal materials shape cells.  We are currently pursuing a number of questions.  To what degree are Arp2/3 networks sufficient for forming actin caps, displacing actomyosin and reshaping the cortex?  How does a smooth boundary form between an actin cap and its actomyosin border for bending the cortex?  How are formin-based actin networks induced within the cap, and how do they interact with Arp2/3 networks for cap growth and function?  We are among the first groups to address how separately formed actin networks engage each other for control of the cell.  These networks can be viewed as materials that interact to shape cells.  Imbalances among sub-cellular materials likely contribute to disease states (e.g., abnormally migratory metastatic cancer cells) and small molecule inhibitors could re-balance the system.  Additionally, there is exciting potential for active materials in micro-machine manufacturing.  Our in vivo and in silico studies show the potential of micro-patterning two or more distinct active materials, with either pushing or pulling activities, for the assembly of intricate micro-machines. 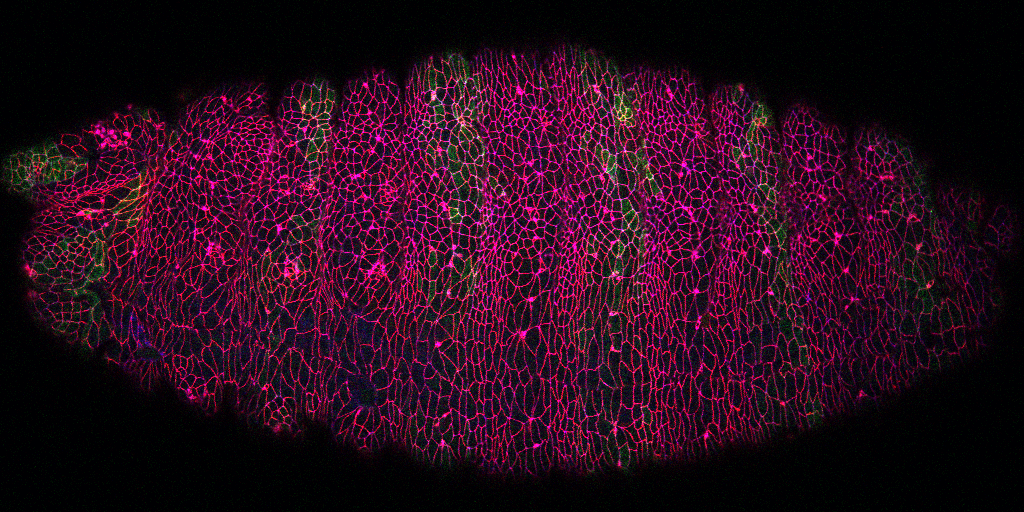 While the research above focuses on early embryo cleavage, our second major pursuit is the regulation of tissue morphogenesis by Arf small G protein signaling.  Such signaling is well-studied in single or cultured cells, but poorly understood in whole animals.  From a genetic screen, we pursued Steppke (Step), a conserved plasma membrane Arf-GEF (Arf activator).  We reported in Current Biology that Step restricts actomyosin activity for proper compartmentalization of the cleaving embryo, providing the first example of Arf-GEF regulation of actomyosin networks.  Also in Current Biology, we published an actomyosin-Step negative feedback loop that facilitates the stretching of one embryonic tissue in response to the contraction of another neighbouring tissue, both in Drosophila and in the vertebrate model zebrafish.  Without Step, cell-cell contact actomyosin contractility becomes abnormally strong.  This contractility draws multiple cells into local rosettes, distorting the normally even elongation of the lateral ectoderm in response to pulling forces from a dorsal tissue, the amnioserosa.

The tissue spreading defect with Step depletion has similarities to tissue jamming—a reversible transition from fluid to solid tissue structure with relevance to both normal and pathological tissue morphogenesis (e.g., abnormal lung tissue homeostasis linked to asthma).  Intriguingly, we recently found that Step overexpression induces an epithelial-to-mesenchymal transition of the Drosophila ectoderm, a dissociation of tissue cells relevant to cancer progression.  Both the loss-of-function and gain-of-function effects are linked to the Arf-GEF activity of Step.  Thus, we hypothesize that Step-based Arf small G protein signaling tunes the physical property of an epithelial tissue: too little leads to tissue jamming and too much leads to tissue dissociation.  Mechanistically, we hypothesize that Step induces a set of local molecular changes for growing a supportive cortical domain at cell-cell contacts—without these changes, contacts contract; with excess induction, the cortical domains expand into cell protrusions.  We are currently addressing how Step affects the growth of cell-cell contacts, the molecular responses to Step signaling at cell-cell contacts, and how Step is recruited to these sites and other sub-cellular sites.  Defining players up- and downstream of this conserved Arf-GEF will inform strategies for tuning Arf small G protein signalling for the engineering of tissues and the treatment of cancers and other diseases.

Before Tony’s postdoctoral studies, the Par complex was known to have conserved roles in asymmetric cell division and epithelial cell polarity, and was thought to act as a unit.  Combining genetics and microscopy, Tony made the surprising discovery that the two components of the Par complex (the scaffold protein Par-3 and the adaptor-kinase cassette Par-6-aPKC) act independently.  They use distinct mechanisms to localize to neighbouring zones of the cell membrane where they have unique effects: Par-3 promotes adherens junction positioning and Par-6-aPKC antagonizes the Par-3 pathway to distribute junctions evenly.  The discovery of Par-3 as a junctional organizer was itself paradigm-shifting as adherens junctions were previously viewed as primary landmarks for organizing epithelial cells.

The Harris lab then discovered that Par-3 accumulations engage and position adherens junctions through mesoscale interactions, rather than as an integral part of the junctions themselves.  Specifically, the complexes were shown to engage as semi-autonomous assemblies with distinct molecular numbers and dynamics.  Upstream, we found that Par-3 accumulations arise through a local positive feedback loop with centrosomal microtubules (separately positioned landmarks of the cell), and that this loop relies on a global membrane inhibitor of Par-3, the kinase Par-1.  This regulatory control seems to displace Par-3 from most parts of the cell while priming Par-3 for accumulation at the plasma membrane sites where it organizes junctions.  A multi-faceted mechanism of redundant interactions then maintains Par-3 at these sites.

Molecular Biology of the Cell, 2012

Molecular Biology of the Cell, 2012

We also discovered that Par-3 and the Par-6-aPKC cassette regulate actomyosin network dynamics for tissue internalization.  These findings were among the first to implicate pulsatile actomyosin networks in tissue morphogenesis, and the first to identify a role for Par proteins in their regulation.  Further evidence suggested that a delayed negative feedback loop connects actomyosin assembly with the recruitment of their inhibitor aPKC, a general regulatory logic that induces pulsations, and that Par-3 subsequently inhibits aPKC for sustained constriction.  This conceptual model was recently substantiated by mathematical modeling published in collaboration with Prof James Feng, UBC (Biophysical Journal, 2018).

Flattened (squamous) epithelia are common across animals but it is unclear how they form.  We discovered that tall, columnar epithelial cells use their microtubules networks to rotate themselves by 90◦ for a flattened configuration.  For the tissue to also elongate, adherens junction networks must be flexible, and we documented how these junctions are re-positioned.  An important current project in the lab is pursuing how adherens junctions are supported in this specialized cell type, with the hypothesis that they rely on Par-3 and microtubules.